I got my first tattoos when I was 18 years old. Now, at 34, I have been tattooed over 30 times, and some of my tattoos are almost of legal drinking age. Over the last couple of years, I have noticed a growing popularity of hand, neck and the taboo face tattoos. To gain a better understanding of tattoo culture, I caught up with two up-and-coming tattooists, Cong, who asked to be identified only by his first name, and Chanse Oviatt.

I met Cong at his shop at Enso Tattoo on 17th Avenue on a scorching hot day in August. He came dressed in expensive clothing and looked a little overdressed for the weather but was extremely dapper, and I was actually a little jealous.

We headed down the street to grab a bite to eat at Royale. Cong ordered a glass of Riesling and I a glass of water. Despite the dress shirt and slacks, Cong is unable to cover his face tattoos. His most recent tattoo is an S beside his left eye. He said it is a tattoo to pay homage to the late West Coast rapper Nipsey Hussle, who was murdered in front of his clothing store in February. Cong also sports graffiti-style tattoos on both sides of his head and one tattoo that acts as a permanent sideburn on the right side of his face.

Face tattoos are a significant commitment, so I had to know: what made Cong get a face tattoo? 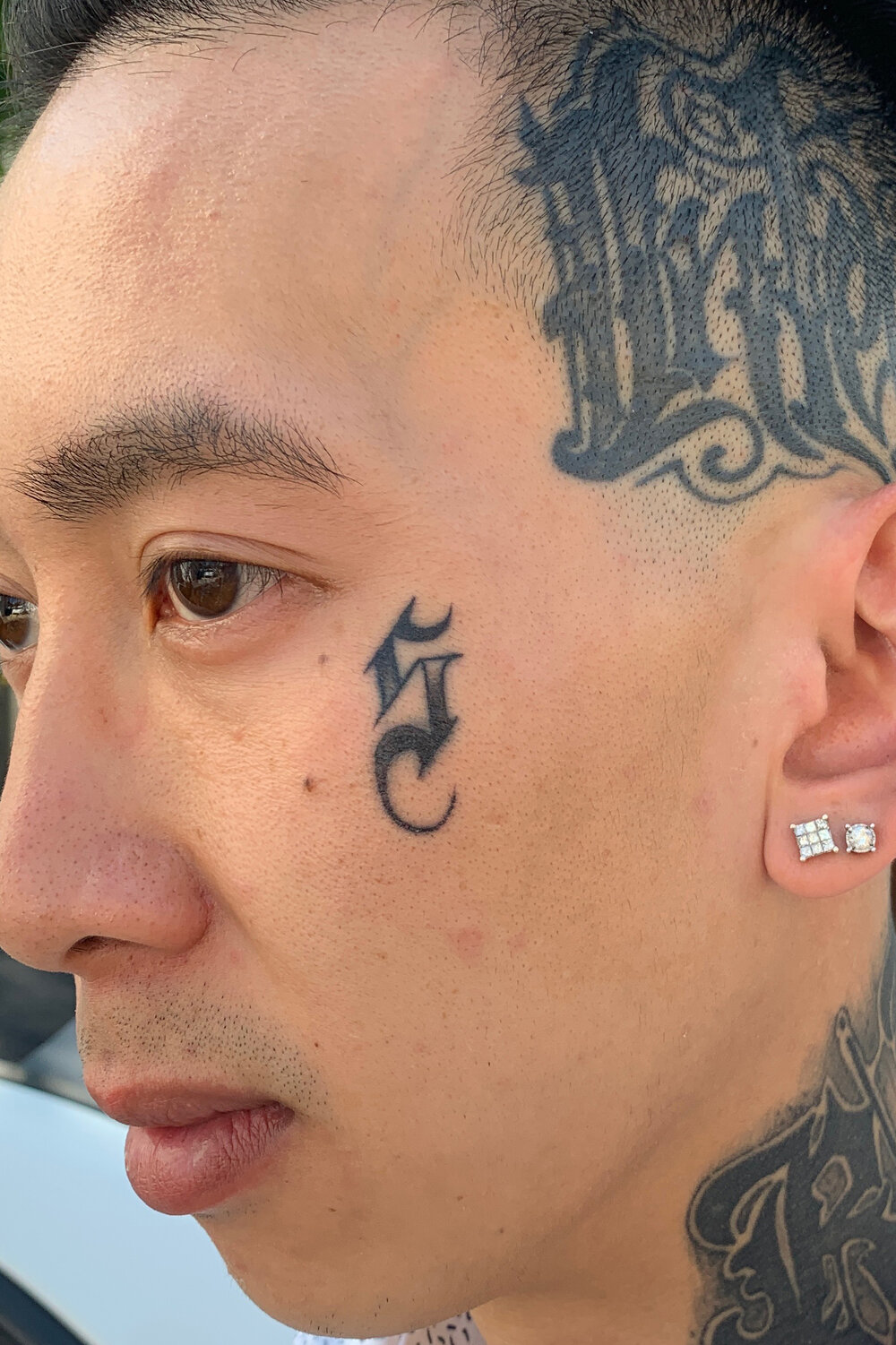 “I knew I always wanted to get my face tattooed. But I honestly ran out of space, and the face was the only spot I had left,” he said. “As a tattooist, you gradually work your way up to the face tattoo.”

Cong believes there are a couple of different reasons for the spike in facial tattoo popularity.

“Hip-hop culture is definitely a driving factor,” he said. “TV shows like Ink Master are also influencing the younger generation to make that choice to get a face tattoo.”

“But if someone wants to mess up their life or not in the long run, I am not their dad,” he said. 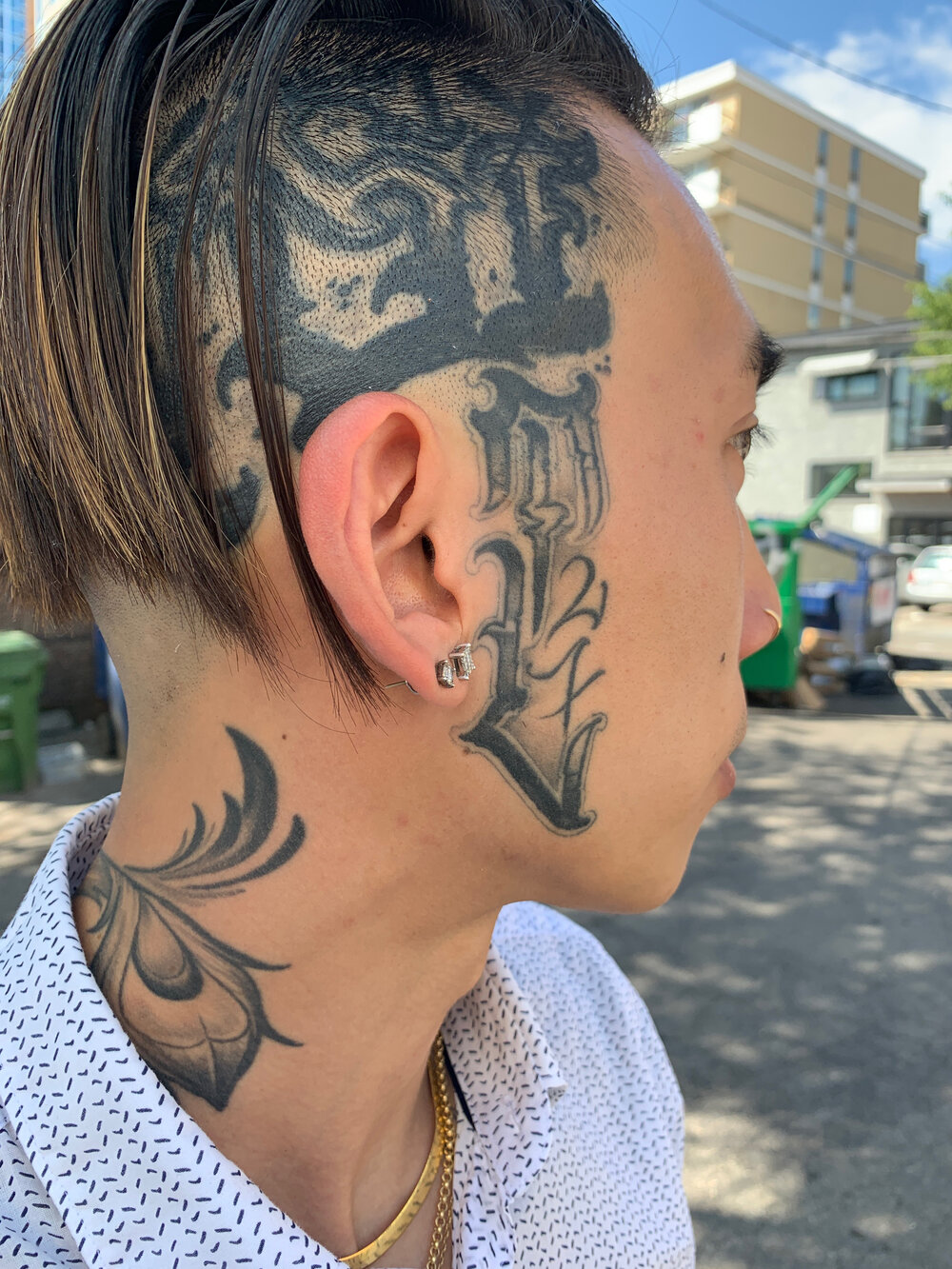 Cong says most people gradually work there way up to face tattoos and they are not typically their first tattoo. Photo: Peter Brand

Oviatt got his face tattooed when he was 18 years old. Working at nightclubs and as a drywaller allowed him to wear whatever style of tattoo he pleased. However, as he grew older and changed career paths into nursing and eventually psychology, he began down the painful path towards removing his face tattoos.

“When I was younger, I didn’t care what people thought of my face tattoos,” he said. “But I never anticipated how my perspective on socializing with the general public would change over time.”

Oviatt says when it comes to face tattoos, it all depends on the design and how it fits the face aesthetically.

“Men and women wear them differently,” he said.

Oviatt believes women are driving the trend towards face, neck and hand tattoos.

“There is definitely a tattoo model culture trend that has been happening lately, for sure,” he said.

“With men and face tattoos it is different — it’s almost like the guy has been through some s— or just got out of prison,” he added.

Both artists agreed that when it comes to clients asking for face tattoos, they need to have a serious conversation before they commit to a lifelong piece on their face.

As for Cong, he refuses to tattoo anyone under the age of 18, even if they are accompanied by their parents.